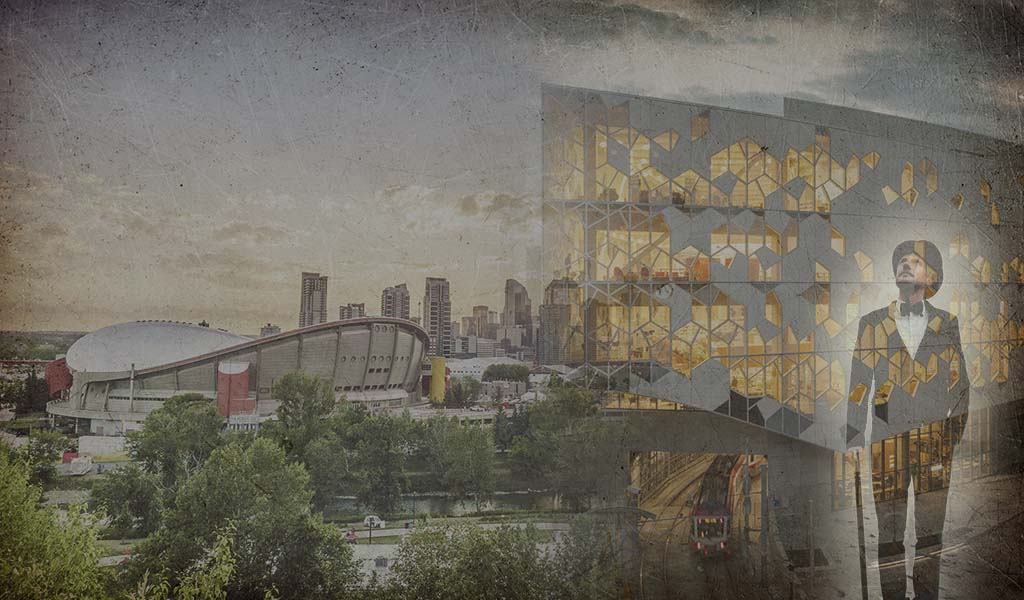 Alberta confronts its visitors with a multitude of landscapes, from the endless flat prairie fields in the east to the southern river valleys and dense northern hinterland, and of course the majestic and unforgettable Rocky Mountains in the west.

Calgary, a thriving concrete and steel metropolis nestled between the Rocky Mountains to the west and the plains ranches to the east, has all the hallmarks of a western city. Young and prosperous, it flourished with the repeated black gold fever of the forties, fifties, and seventies, although its nickname of “Cowtown” testifies to a very different past. Before oil, there were cowboys and landowners, and Calgary was originally developed by a handful of wealthy ranching families.

We suggest you start your city tour at the Calgary Tower (corner of 9th Avenue and Centre Street SW, 403-266-7171), a 55-storey, 762-step tower that stands 190 metres high. The city’s most famous landmark, it offers breathtaking views of the Canada Olympic Park ski jump towers, the Saddledome, and the Rocky Mountains.

Across the street at 1st Street SE is the breathtaking Glenbow Museum (130-9th Avenue SE, 403-268-4100). Three floors of temporary exhibits and permanent collections tell the exciting story of the Canadian West, including Aboriginal peoples, early settlement, and the fur trade, the Northwest Mounted Police, ranching, oil, and agriculture.

The aptly named Saddledome has the world’s largest cable-supported roof and stands as a giant testament to the city’s cowboy roots. It is the home of the Calgary Flames National Hockey League team but also hosts concerts, conventions, and various sporting events. Tours are offered. The park is also home to the Grain Academy, which traces the history of grain farming and features a grain lift and a grain railway that is still in operation.

Fort Calgary (750-9th Avenue SE, 403-290-1875) was built as part of the March West, the North West “mounted police” intervention to stop whiskey smugglers. There is an excellent interpretive centre on site with interesting interactive displays.

Canada Olympic Park (16th Avenue NW, 403-286-2632), commonly referred to as “C.O.P.”, was built for the Winter Olympics on the western edge of Calgary. It was the site of the ski jumping, bobsleigh, luge, and freestyle downhill competitions, as well as the disabled events. The park offers year-round tours and the opportunity to try luge or bobsledding and summer ski jumping.

The town of Jasper has its origins as an old fur trading post. Although Jasper is a small community of about 4,000 people, its location and the railway station built there in 1911 have contributed to its development as a tourist attraction. When the Icefields Parkway was opened in 1940, the number of visitors wanting to discover the majestic surroundings of the small town continued to grow. However, although the tourist interest in the area is real, Jasper is a much quieter little town than Banff.

Mount Edith Cavell rises to 3,363m. Take the south exit from Jasper and follow the signs to the Marmot Ski Area to get there. Several hiking trails have been developed to give visitors a better view of this imposing and majestic mountain and its hanging glacier, the Angel Glacier.

The road to Maligne Lake is 46 km long and follows the valley of the Maligne River. The speed limit is 60 km/h due to the sharp turns and the many animals that cross the road. Before reaching the lake, the road leads to Jasper Park Lodge, one of Canada’s finest resorts, operated by the Canadian Pacific. Right next to it lie the two small lakes, Annette and Edith.

Maligne Lake is one of the most beautiful lakes in the Rockies. Many water activities such as boating, fishing, and canoeing are available. A small trail runs along part of the lake. The lakeside cottage has souvenir shops, a café/restaurant, and a company that runs boat tours to Spirit Island, a small island with a beautiful view of the surrounding peaks.

Edmonton is a boomtown dependent on the abundant natural resources that surround it, but this money pit has been ameliorated with an attractive downtown, a network of parks, and some of the best cultural facilities in all of Canada, as evidenced by its theatres and numerous festivals such as the popular Edmonton’s Klondike Days in July, to name just one. However, the city’s biggest attraction still seems to be its elephantine mall, the West Edmonton Mall! However, the city has an exceptionally refined atmosphere due to its fine restaurants and vibrant arts community. In short, Edmonton has become the technological nerve centre and the service and supply centre of Alberta.

On the east side of Sir Winston Churchill Square is the Edmonton Art Gallery (403-422-6223). Its excellent permanent collection, “From Sea to Sea – The Evolution of Canadian Art”, traces the currents and trends in Canadian art.

Old Strathcona, once an independent town, was founded when the Calgary and Edmonton Railway Company’s line terminated here in 1891. Brick buildings from that era still stand in this historic neighbourhood, the best preserved in the Edmonton metropolitan area.

The four pyramid-shaped greenhouses of the Muttart Conservatory (near the intersection of 98th Avenue and 96A Street, 403-496-8755) are important landmarks in the Edmonton skyline. Underneath three of these glass structures grow flowers characteristic of arid, temperate, and tropical climates respectively.

Dinosaur Provincial Park has been a UNESCO World Heritage Site since 1979. The landscape of this park consists mainly of badlands, which French travellers called ‘badlands’ because there is no food or beavers. This mysterious area contains fossil deposits of worldwide interest, with over 300 dinosaur skeletons found here. Glacial meltwater has carved the badlands out of the friable bedrock, revealing hillsides laden with dinosaur bones. There are two dinosaur skeletons in the park, right where they were found. You can also visit the Tyrell Museum Experimental Station (403-378-4342) to learn about archaeological digs.

The most important stop on the Dinosaur Trail, which runs northwest along the Red Deer River from Drumheller, is the Royal Tyrell Museum of Paleontology (6 km west of Drumheller on Highway 838, 403-823-7707). This huge museum contains over 80,000 specimens, including 50 complete dinosaur skeletons. Visitors can observe the work of scientists.

Back in Drumheller, head southeast on East Coulee Drive along the Red Deer River. About halfway between Rosedale and East Coulee, you’ll see some of the most spectacular fairy chimneys in southern Alberta.

Drumheller’s main attractions are found along the Dinosaur Trail and East Coulee Drive. The present-day site of Drumheller was once on the coastal portion of a large inland sea; its warm, wet climate provided a suitable habitat for dinosaurs. After the extinction of the dinosaurs, the ice covered the land and, as it retreated 10,000 years ago, it cut deep trenches in the prairie. This and subsequent erosion uncovered dinosaur bones and shaped the fabulous landscape of fairy chimneys and coulees that can be seen at Drumheller today.